Apsona's document templates support conditional directives (i.e., if-then-else), so that you can selectively include or exclude content in your document based on data conditions. For example, when creating a Terms and Conditions document, you might want to create different sets of terms based on whether your customer's credit rating. Or when creating a thank-you letter, you might want to include extra content or verbiage to recognize your top donors. Here, we describe how to use this feature. If you are not already familiar with Apsona Document Merge, you can visit our pages about the document generation tool in general, and generating Word and PDF documents in particular.

Below is a screen shot of a small fragment in a Word document, illustrating the essentials of this feature. If you like, you can download the template that produced this screenshot.

In this example screen shot, we use four special merge fields, IF, ELSE IF, ELSE and ENDIF, to provide the directives. Each of these directives is a standard Word merge field, created via Insert - Quick parts - Field or via the more expedient button-and-macro shortcut. The code in the example looks for the template field DayNo, and if that field has a value 6, it produces the text "Saturday." If not, the code looks for the field Day, and if that field has value Sun, it produces the text "Sunday." Otherwise, it produces the text "a weekday." As another example, you can use conditionals to generate the correct signature text in an acknowledgement letter, along the following lines:

How to create a conditional directive

In Microsoft Word, you would use the usual menu choices of Insert - Quick Parts - Field to insert a merge field within which you would place the text of the conditional directive. You can view an example animation showing how to create these directives using Word.

Structure of the IF directive

The IF directive must be of the very specific form

where templateField is a merge field name, operator is a comparison operator, and value is the value with which to compare the merge field. The templateField in the IF directive will appear among the mappable fields in step 2 of the merge action builder, so that you can map it to a data field in your data source.

Examples of IF directives

When you want to test whether a string or text field is non-empty, it is better to use the construct «IF MY_FIELD», without the operator or value, rather than using «IF MY_FIELD != "" ». This is because of the way databases distinguish between null and empty values. Thus, for example, suppose you have in your document the construct below: If you then use this document with data that contains a value for MY_FIELD, the result would be but if the data has a null or empty value for MY_FIELD, the result would be Thus the effect is to inject the word "not" exactly when needed.

If you create an IF conditional without an ELSE part on a line by itself, it will produce empty space if the conditional fails. Below is an example to illustrate this point.

The above screen shot shows a template with two variations, the first with an IF-ENDIF on a line by itself (that will produce an empty region), and the second with an ENDIF on the next line (which will not produce an empty region). Note also that the "No empty regions" template has the Billing Street field immediately following the ENDIF, rather than on a separate line, so as ensure that it does not contribute a line break. For comparison, below the result of expanding the template on some sample data. 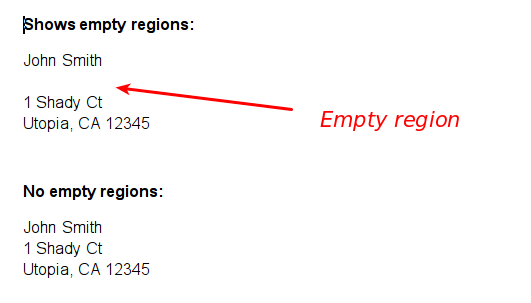 If you want to use this technique, use a line break, not a paragraph break. You can insert a line break in Word by typing Shift-Enter. If you use a paragraph break instead (by just pressing Enter without the Shift key), you might find that under some data conditions, the resulting output Word document becomes un-openable. This is because, when the IF condition fails, the end-of-paragraph marker will not be generated, even though a start-of-paragraph marker has been generated before the IF. So the output document has invalid markup, and Word will produce an error when you try to open it.

You might see an error popup with an error like Found 'ENDIF' without a matching IF field, even though it looks like you have all your IFs and ENDIFs lined up. The error indicates that the Document Generator could not recognize the IF field you provided. In such a situation:
About
home | contact us | events | blog
terms of service | privacy policy