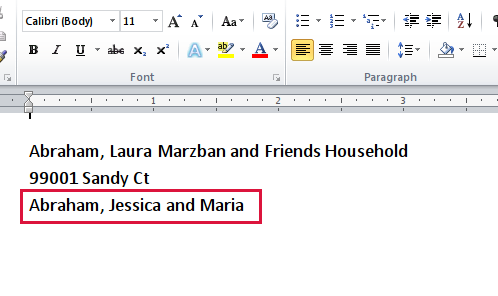 To make this happen, you will need to use the combine function.

Some notes to bear in mind:

The Document Generator includes a means for producing sublists. But that is not adequate in the present situation, for two reasons. One, that the sublist mechanism requires the sublist records (the first names, in this case) to appear in a table, a bullet-list, a numbered list, or other similar block. And second, that mechanism doesn't offer a way to selectively include separators between the data - the separators in this case being the comma and the word "and".

To address this situation, the Document Generator provides a combine function that can be applied to a single field from a sublist, to produce text with embedded separators.