Multi-step reports include a feature for "auto-filling," similar to Microsoft Excel's "fill" feature. This applies to situations where a subsequent step in a multi-step report produces more records than a previous step, e.g., when you create a report of Accounts and corresponding Opportunities, in which each Account might have multiple associated Opportunities. The default layout of such a report might look like the screen shot below, where we show Opportunities, Contacts, Cases and Case Comments associated with certain accounts.

With the "auto-fill previous steps" checkbox checked, the correct behavior should be to simply propagate empty cell data into cells where it is meaningful to do so, without affecting the number of records.The correct representation looks like the one below, with some of the auto-filled regions highlighted.

However, to date (as of March 2015), the implementation was causing the number of records to increase significantly, because the data values were being copied across all possible cells, and thus misleading users. It was producing an auto-filled rendering that looked like the screen shot below. 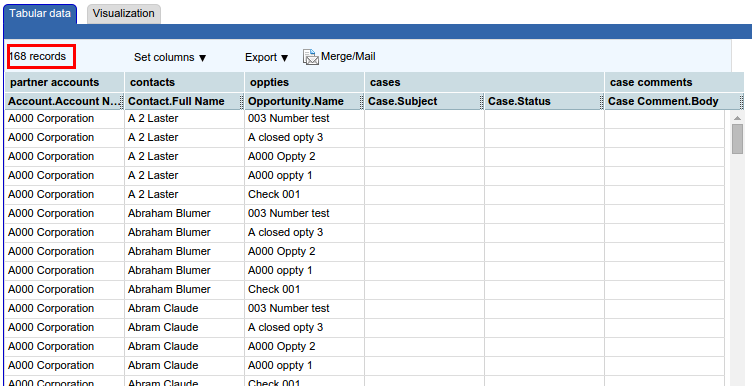 This behavior is now changed to reflect the correct rendering, along with improved performance.